The Mineralogical Museum Hamburg is active in meteorite searches. Initially the museums was involved in the very first meteorite search expeditions carried out in the Mongolian Gobi Desert (EUROMET, 1993) and the Sahara of the Repubic of Niger (GEO Magazine, 1997). From 2000 trough 2004 the museum organized several search expeditions into the Libyan Sahara in cooperation with Libyan institutions. In the Antarctic summer of 2007/2008, the first German meteorite expedition in the Queen Maud Region of East-Antarctica took place. This search has been initiated by the Mineralogical Museum Hamburg and was realized in cooperation with the Federal Institute for Geosciences and Natural Resources (BGR) and the Alfred-Wegener-Institute for Polar and Marine Research (AWI). In 2009 a meteorite search in the Rub' al Khali of the United Arab Emirates was carried out in cooperation with the Environmental Agency Abu Dhabi.

Examples of meteorites found during search expeditions of the museum. 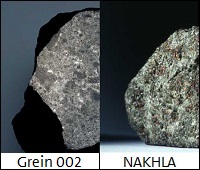 Grein 002: A rare enstatite chondrite of class EL 4-5. The stony meteorite of 609 g was discovered on the 3rd of March, 1997, by a joint team from the magazine GEO, the Max-Planck-Institute for Chemistry, Mainz and the Mineralogical Museum of the University of Hamburg. It was found in the Ténéré du Tafassâsset, a part of Central Sahara in the Northeast of the Republic of Niger.

Dar al Gani 983: A polymict eucrite of 933 g. This achondrite was found in 2002 during a German-Libyan research expedition (Mineralogical Museum Hamburg and the Industrial Research Centre, Tripoli, Libya) in the very southern part of the Dar al Gani (Central Libya). It is a strongly shocked breccia, rich in maskelynite (feldspar glass). Parts of the meteorite surface still shows a shiny black fusion crust, which originated from the fiery passage of the meteorite through the Earth`s atmosphere.